What Are the Uses of Seamless Steel Tubes?

1. General pipe: Due to the strong bending resistance of steel pipes, in recent years, steel pipes have been used in roof frames, beams, and columns of buildings such as factory buildings. For example the construction of stadiums and airport terminal buildings. China's high-quality carbon structural steel, low-alloy structural steel, alloy structural steel, stainless steel, and other seamless steel pipes produced in accordance with domestic and international standards have played an important role in the development of the national economy and the improvement of people's living standards. The bigger the effect.

Power station boiler: The process of heating water into steam, superheated steam: When the softened water enters the boiler, it first enters the economizer, and the residual heat of the flame in the furnace is used to heat the economizer to increase the temperature of the water, and then enter the arrangement The water wall tube around the hearth heats the water wall by the flame burning in the hearth. The water in it turns into steam with water and is collected in the drum for water and steam separation. The separated water then enters the water wall and the steam enters The superheater located in the upper part of the furnace is further heated to make the steam reach the required temperature and pressure. Finally, the steam is sent to the steam turbine through the steam duct outside the furnace. The temperature and pressure of the steam that has passed through the steam turbine have dropped greatly. After reheating into superheated steam, it is reused. The technical performance of high-pressure boiler tubes is also continuously improved with the development of power plant units. At the beginning of the construction of the port, it was nearly 10,000 kilowatts. Later, 100,000 kilowatts, 200,000, 300,000, and 600,000 kilowatts were built. Now the capacity of a single generator set in the newly built power plant in Pudong has reached 900,000 kilowatts. This requires the temperature and pressure of the steel tubes in the boiler to increase accordingly. If the steam pressure is gradually increased from the earliest 4Mpa to the current 25-30Mpa, the steam temperature is also increased from 450 ℃ to 540 ～ 560 ℃. The maximum wall temperature of the superheater and reheater tube has reached 600-630 ℃. In order to meet the development requirements, the steel materials of high-pressure boiler tubes have been developed from carbon steel to low alloy steel, alloy steel, and high alloy heat-resistant steel containing chromium, molybdenum, vanadium and other alloy elements. At the same time, the purity of steel is higher. 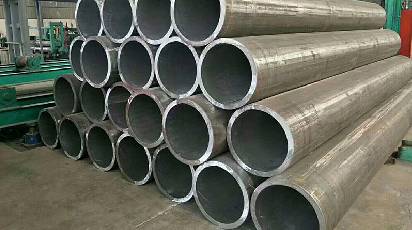 Both oil and natural gas are buried deep underground. When oil and gas are to be extracted, drill holes must be drilled down the ground (oil wells, gas wells). Drilling tools are used for drilling. Except for the drill bits, all of the drilling tools are connected by steel pipes The drill string is the core drilling tool used to drive the drill bit from the surface to the bottom of the well. It is also a passage from the surface to the bottom of the well. The drill string is composed of square drill rods, drill rods (including a small number of weighted drill rods), and drill collars. Most of them are drill rods. During the drilling process, the rig rotates the kelly rod, which is connected to the lower end of the kelly rod, and the drill collar and the drill bit are connected to the lower end of the kelly rod. Therefore, the drill pipe plays the role of transmitting power and transporting mud. As the borehole continues to deepen, drill rods should be added one by one and connected to continuously lengthen the drill string to the specified depth. During the drilling process, a casing is inserted to support the well wall of the oil and gas well according to the formation conditions. Drilling a well, according to different depths and formation conditions, generally need to install multiple layers of casing, namely surface casing, technical casing, and oil.

Next: Precautions for Steel Storage and Basic Maintenance Of Materials