Process Characteristics And Application Of Spiral Steel Tube Are Introduced

a. During the forming process, the steel plate deforms uniformly, the residual stress is small, and the surface is not scratched. The processed spiral steel pipe has greater flexibility in the range of diameters and wall thicknesses, especially in the production of high-grade thick-walled pipes, especially small and medium-caliber thick-walled pipes. More requirements in terms of spiral steel tube specifications.

b. Adopting advanced double-sided submerged arc welding process, welding can be realized in the best position, it is not easy to appear defects such as wrong edges, welding deviation, and under-welding, and it is easy to control the welding quality.

c. Carry out 100% quality inspection on the steel pipe, so that the entire process of steel pipe production is under effective detection and monitoring, which effectively guarantees the product quality.

d. All the equipment of the entire production line has the function of networking with the computer data acquisition system, realizing the instant transmission of data, and the technical parameters in the production process are controlled by the central control room. 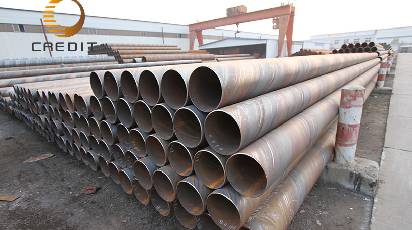 Welded steel ssaw spiral pipe adopts double-sided submerged arc spiral welding technology, which is continuous welding of narrow strip (plate) coil. It has been widely used in long-distance oil and gas pipeline projects such as the West-to-East Gas Pipeline in China and is the main pipe type adopted in the long-distance oil and gas pipeline project in China. Spiral steel pipes are widely used in natural gas, petroleum, chemical industry, electric power, thermal power, water supply, and drainage, steam heating, pressure steel pipes for hydropower stations, thermal power generation, water sources, and other long-distance transmission pipelines and pile driving, dredging, bridges, steel structures and other engineering fields. Spiral steel pipe thermal fatigue stability generally refers to the ability to resist cracking under the action of cold and hot alternating. Cracks caused by the alternation of cold and heat are called thermal fatigue cracks. The main reason for the scrapping of die casting molds and hot forging molds in the molds is that thermal fatigue stability is poor and thermal fatigue cracks are easily generated. For die steel, its thermal fatigue stability mainly depends on the toughness and strength of the steel. Therefore, die steel with good thermal fatigue stability must have good toughness and high strength (high wet strength). The surface of the spiral steel pipe is impacted by high-velocity and turbulent fluids and is simultaneously damaged by wear and corrosion, which is called wear and corrosion. Impact corrosion is the main form of wear corrosion.

Under the impact of high-speed fluid, the spiral steel pipe is damaged by the protective film, and the bare metal at the break is accelerated to corrode. If the fluid contains solid particles, the wear and corrosion of the spiral steel pipe are more serious. Its appearance features are local grooves, ripples, round holes, and valleys, usually showing directionality. Equipment exposed to moving fluids such as pipes, tees, valves, blowers, centrifuges, impellers, heat exchangers, exhaust cylinders, etc. can all produce impact corrosion. Soft metals such as copper and lead are more serious.

Next: Surface Treatment Method of Spiral Steel Tube and Its Derusting Method