Seamless steel pipe is a round, square and rectangular steel with a hollow section and no seams on the periphery. Seamless steel tubes are made of steel ingots or solid tube blanks by perforation to form capillaries, and then made by hot rolling, cold rolling or cold drawing. Seamless steel pipe has a hollow section and is widely used as a pipeline for conveying fluids. Compared with solid steel such as round steel, steel pipe has a low bending and torsional strength and is lighter in weight. It is an economical section steel and is widely used in manufacturing structures. And mechanical parts, such as steel scaffolding for petroleum drills.

In the 1930s, due to the use of three-roll tube mills, extruders, and periodic cold-rolled mills, the quality of steel pipes was improved. In the 1960s, due to the improvement of the continuous rolling mill, the emergence of the three-roller perforator, especially the success of the application of the tension reducer and the continuous casting slab, improved the production efficiency and enhanced the ability of seamless pipes to compete with welded pipes. In the 1970s, seamless pipes and welded pipes went hand in hand, and the world's steel pipe output increased at an annual rate of more than 5%. 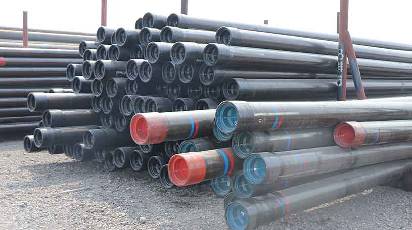 The analysis indicates that seamless steel pipes must have three conditions because the gas in the melt is precipitated as bubbles:

First, the dissolved gas is in a supersaturated state;

Second, the sum of the partial pressures of various gases in the bubble is greater than the external pressure acting on the bubble;

Third, there are bubble nuclei larger than the threshold.

Under actual casting conditions, non-spontaneous bubble nuclei in the melt are easy to form because there are always large and non-metallic inclusions, aggregates, and bubbles that do not escape during refining. In addition, although the melted melt contains hydrogen below the equilibrium concentration, the gas concentration during the solidification process redistributes the junctions, causing supersaturation of local hydrogen-containing children in the liquid at the front of the crystal, so it is a seamless steel pipe. The formation of bubbles creates favorable conditions. When the partial pressure of hydrogen in the crystallization front liquid increases above the external pressure, bubbles may form. However, if the buoyancy of the formed bubbles is less than the adhesion of the solid phase surface to the bubbles, or the floating speed of the bubbles is less than the crystallization speed of the ingot, the bubbles will stay in the ingot and become pores.

The stomatal criterion number indicates the multiple of the concentration of the gas in the liquid phase at the crystal interface compared to the original concentration of the liquid when the metal or alloy crystallized. Therefore, the larger the seamless steel pipe, the greater the degree of gas supersaturation in the liquid phase at the crystalline interface, and the easier it is to form pores.

Previous: Why Are Thermal Insulation Pipe so Popular?

Next: What Is the Difference between Seamless Steel Pipe and Ordinary Steel Pipe